Nature is above all, profligate. Don’t believe them when they tell you how economical and thrifty nature is, whose leaves return to the soil. Wouldn’t it be cheaper to leave them on the tree in the first place? This deciduous business alone is a radical scheme, the brainchild of a deranged manic depressive with limitless capital. Extravagance! Nature will try anything once. -Annie Dillard

Greetings from the last frontier. We arrived in Sitka after an adventurous (“Hope you closed that porthole!”) transit up the west coast of Baranof Island. We had been at anchor at one of the most picturesque spots either of us has seen near the southern tip of the island (Puffin Bay), but learned from Coast Guard weather reports that we had a narrow weather window to get to Sitka and we grabbed it. Since we left Ketchikan on 7/16, we have been mostly anchorage-hopping, sans phone or internet. It’s been heaven. Low mile days brought us to a series of jaw-dropping spots carefully chosen by Bill and I don’t think there was a clunker in the lot.

Our route from Ketchikan to Sitka

Nature has been providing a kick-ass treatise on why we do what we do and go where we go. There is so much to see and learn, I’ve created a record of my curiosities so that once we are reunited with the ability to browse the interwebs, I can follow up on them. In the moment, though, it’s enough to just absorb and enjoy. I have found a rhythm and connection during our travels that I neither expected nor fully understand. Annie Dillard captures the clarion call that immersion in nature provides: "I had my whole life been a bell, and never knew it until at that moment I was lifted and struck.” We have been lifted and struck repeatedly on this leg of our journey, and this results in a giddiness I've not often experienced.

Our chief occupation these last weeks has simply been watching the show. My visual exploration starts at the water: bait fish are jumping in response to something bigger threatening their underwater progress, jellyfish are undulating and bobbing past, the tide is at this particular point in its cycle, and the wind is gathering or calming. Then my eye is drawn to the rocks at the shore, the striated diary of a millennia of tide cycles. That draws my gaze to the base of the trees, an almost perfectly horizontal line of mostly evergreens that the high tides have created, as if someone methodically trimmed the lower boughs to a perfect symmetry. Because there is so much to see with just that input, I sometimes forget to scan the top of the tree line that has its own jagged rhythm, peaking and dipping, sometimes shrouded in mist and sometimes perfectly articulated. All of these points of observations stay with me far after we’ve left any given bay.

For now, the heavier rains we had in Ketchikan have somewhat receded and we use the kayaks daily. It’s become my favorite way to explore, the lower vantage point more intimate than what we can manage from the boat or shore. It’s utterly quiet save my progress through the water and the chattering streams that burble into the bay from the mainland. Floating driftwood, the white and lacy moon jellyfish that surround my kayak, or an unsuspecting otter are our constant companions. I love exploring the tiny islands that dot our bays each night. As I paddle along their coasts, I can peer down into the clear water and see the rocks that form the wider base of the land mass. Everything feels alternatively minute and enormous, but always somehow interconnected.

We start many mornings lowering the dinghy so Bella and Bill can hit the shore to explore the land a bit. I love to watch Bella’s excitement gather as she attends to the familiar signs her morning romp is nigh: Bill up top getting the dinghy ready to launch, me guiding it down, releasing the carabiner from the winch line and guiding the dinghy painter to the aft swim step to secure it. She’s ready to jump in as soon as the boat is pulled near and waits, her little form taut with anticipation – ears up, tail wagging, and her eyes on the guy who’s going to make it all happen for her. After a short motor to the most promising scrap of beach, with Bella perched high on the bow, the two of them alight and get down to some serious exploring. The woods are often too dense to make too much progress inland, but there's still plenty to see. Some anchorages bear traces of the detritus from fishing boats – buckets, tangled nets, and plastic in countless forms. About a week ago, Bill filled the dinghy to the brim with this stuff so we could dispose of it in Craig. But in most coves and bays, there are no human remnants visible to the eye and it feels like we’re the first humans to touch these bits of land in hundreds of years. 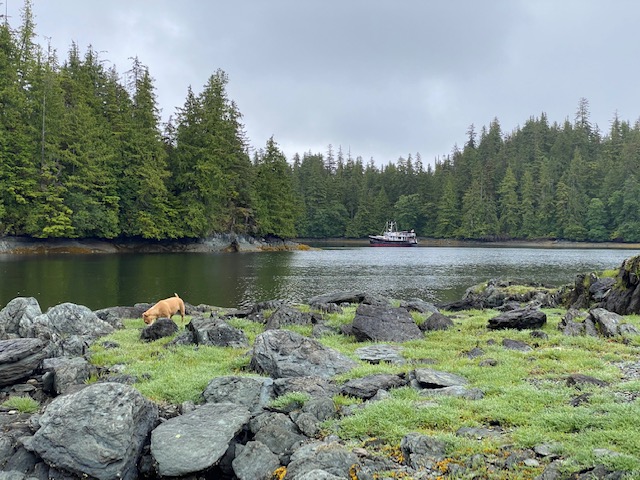 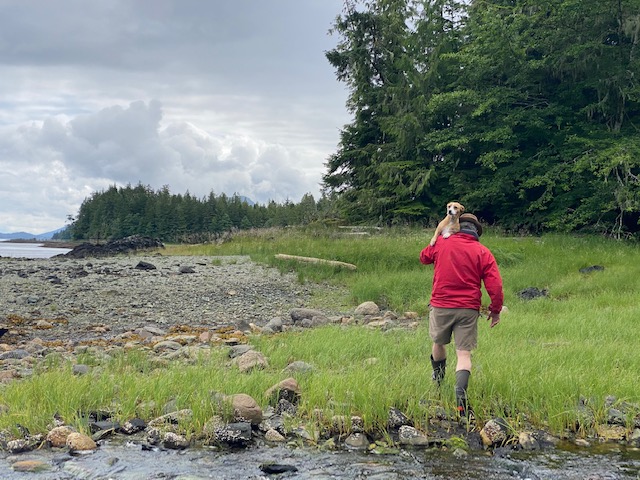 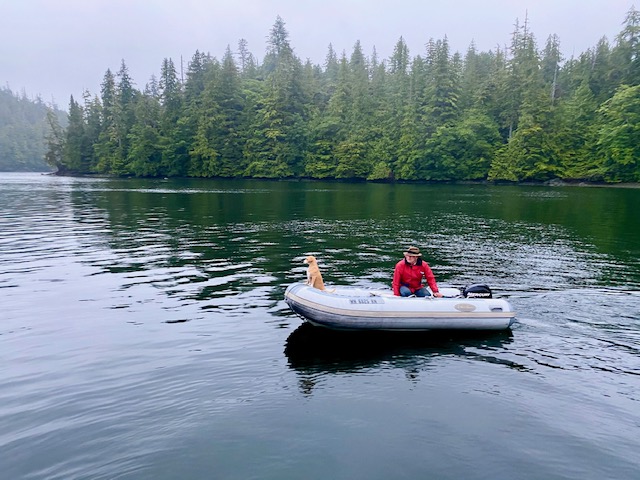 While they wander and explore, I turn to whatever is in front of me: putting in our kayaks so Bill and I can head out once Bella’s thirst for land has been satisfied, making order, thinking, reading, and writing. There’s nowhere I’d rather be and nothing else I’d rather be doing. Sometimes I’ll pick up the binoculars and head to the top deck and scan the horizon. The other morning, before anyone else was up, I spotted an adult bald eagle on the rocks with two chicks, picking through something they all seem keenly interested in. I’ve never seen eaglets so I sat and watched as long as I could.

In my old world, I would armor up to meet my day because that seemed like the smart thing to do. Instead of lugging around a full suit of armor, I’ve managed to doff all but one or two bits. It has taken me a long time to shed the tension of my old life, where tilting at windmills and the often nagging worry of what I would now call “urban concerns” intrudes on my ability to take in all of what’s available to me out here. This anxious perseveration is as old as I am, but it’s slowly shifting and as it does, there’s more discernible to my inner and outer eye. Having something to always push against (real or imagined) felt like the noblest way to stay in tune with the world; politics, money concerns, relationships, and work puzzles would all stew as I navigated the knots and tried to sort and make sense of them, and then move on. That approach is now distinctly out of step with where we find ourselves and it seems easier every day to disengage with what no longer serves. I am eager to see how far I can foster this shift and instead reserve my energy.

If you will stay close to nature, to its simplicity, to the small things hardly noticeable, those things can unexpectedly become great and immeasurable. --Rainer Maria Rilke

Like Moon jellyfish. They’ve been omnipresent for much of our time in the SE, but certain bays seem to team with them. During our time in the south arm of Kell Bay off Kuiu Island, we were literally swarmed. They range in size from a few inches across to the width of a large dinner plate. Around dusk, they begin gathering around the boat, but seemed to focus on where we physically stood. It’s the strangest thing...when Bill was fishing off the aft deck, they swarmed there. When Bill and Bella left for an evening fishing trip in the dinghy, the jellyfish congregated on the aft port side, where I was sitting reading but nowhere else. It’s almost as if they are looking for our heat signature. In the morning, I see a wide and long band of them congregating mid bay. Later I learn that Aurelia Aurita survive well in lower salinity environments, like the bays we anchor in. Their congregating behavior may have more to do with water currents than intentional community seeking as scientists who study them label them as solitary. I’m not so sure about that after watching them closely. Interestingly, the moon jellies can undergo what’s called life cycle reversal, essentially growing younger rather than older, even though their entire lives probably span about 6 months. They are beautiful to watch, these Aurelia Auritas, glowing in the twilight. It’s tempting to ascribe some mystical quality to them. I like that in a sea creature.

Otters are another creature that were both ubiquitous and delightful over the last couple of weeks. They sort of strike me as aquatic hobbits – charming and good at what they do but distracted by the pleasures of life. This hedonistic quality is evident as we spy them floating on their backs, feet and head poking up as their sleek middles form a “U” underwater, gnawing on a recent catch or cuddling their young. They’re so engrossed in what’s right in front of them, it takes them a while to realize we’re near. Their dawning awareness is comically tardy, but they rally by eventually getting vertical while making serious eye contact and then whoosh! they make themselves scarce. I love them for this – their lack of constant vigilance in favor of relishing their agile little lives.

On the other end of the creature spectrum were the many whales we were fortunate to see, mostly as a result of motoring slowly and stopping to fish. In Clarence Strait inside Wedge Island, we had our closest encounter with a solitary humpback feeding off the rocks. This one came within a boat length from us, close enough to get a good sense of not only their enormity but their grace, too. Humpbacks put on a great show when they’re feeding, beginning with the expanding concentric circle of bubbles that precede their wide-mouthed and baleen flashing breeches. We assumed this whale would steer clear of us, but he/she was apparently curious and came close enough for us to get a spectacularly intimate look at the way these creatures feed and move. What a trip. While that was our only truly close encounter, these beauties have been with us consistently since arriving in Alaska.

Off Prince of Whales Island and Wedge Islands

And finally, the modest rock. I have loved watching what the soil and trees are perched on and what is underfoot on our many shore walks. From the jaw-dropping rock faces hanging off the mountains to the smallest scree, the forms are so diverse and the colors...lordy, they are fetching in their seemingly random composition. They lend a beautiful solidity to the softer sea and sky.

The rocks of Nina Cove

It’s beautiful here in Sitka when you can actually see your surroundings. The mountains seem to rise right out of the sea. This is the first town we've actually been able to explore and we're so happy we bought our bikes along so we can amble around on land.

Just today, Sitka took off her bulky overcoat and showed some leg. For a town that rains around 235 days of the year, this is a day to appreciate. Sitka’s terrain feels markedly different from Ketchikan’s and as we travel further west and north, I suspect the land, sea, and sky will continue to shift and offer up more to marvel at. We should reach Glacier Bay in a couple of weeks and plan to take our time getting there.

Sitka's harbor in her glory

The Path to Ketchikan